How To Pick The Perfect Motorbike

Grace Murphy is an experienced reviewer and journalist dedicated to sharing updates from throughout the business market, as well as reviews on the products and services you want to hear about. Small businesses across the corporate market have relied on her insight and knowledge to drive them forward for years. Read on to find the latest reviews and updates that could make all the difference to your business.

Riding a motorbike is a thrilling experience for both new and experienced riders, so it’s no wonder that people from all walks of life are embracing biking and becoming motorbike riders.

According to the Department for Transport, more than a hundred thousand motorbikes, scooters and mopeds are registered each year in the UK, with that number rising year on year. If you’re keen to embrace this thrilling mode of transport, then read on to learn more about how you can find the bike to suit you.

Remember That Anyone Can Ride

If you’re still on the fence about buying a motorbike and worry that it might not be the best option for you, then remember that almost everyone of any ability can easily learn to become a proficient motorbike rider. The market for bikes has grown in recent years, and it’s now more than just tattooed old men in leather jackets; women and young people are now entering the motorbike market in droves in search of thrills and an economical way to get around. All you need is the right motorbike, so read on to find out more about how you can find the vehicle that’s best for you. 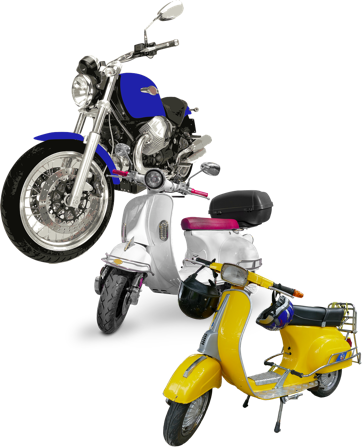 There are three core types of two-wheeled vehicles, and each has its own benefits. A motorbike is a catch-all term referring to any form of motorised two-wheeled machine, whilst mopeds and scooters are separate. Often, a motorbike is used colloquially to refer to a machine that can be ridden with an A1 or A licence, and has an engine capacity of 35kW or more.

Mopeds and scooters are smaller vehicles, and if they have the right engine capacity then they can be ridden by riders who don’t have a full license, but just a Compulsory basic training (CBT) certificate that proves they’ve passed a practical and theory test, as well as a provisional driving license. In the UK you can ride an AM class moped at as young as 16 years old.

So, in short, the type of machine you decide to buy depends entirely on the licence you have, or are able and willing to get. It’s illegal to drive the wrong class of vehicle, and this is also incredibly dangerous, so it’s important that you make sure that you’re legally allowed to drive the class of bike you want before you start shopping around.

Think About What You Want A Bike For

The type of rides you take your bike on, and the amount of time you intend to spend riding it, will have an affect on the kind of bike you need. Consider whether you want to take your bike out on a track, or if you’d prefer to ride it on the road. If you’ll only be taking your bike on short journeys, like to and from work, then you’ll want a road bike, whereas if you intend to race or ride long distances for enjoyment, then you need to take more time considering the bike you want to buy.

Engine size, wheels, mechanics and other features will all play a part in the comfort of your ride, so if you want to take your bike out on long ride then you’ll need to make sure that you select the perfect bike to suit you. More casual riders won’t need to take as much time exploring the technical details of their bike, but it will help them to find a more comfortable vehicle that better suits their needs.

There are thousands of models of motorbike on the market, which can make it hard for potential buyers to narrow down their search. To make it easier, try finding a brand that provides the machines you like.

Explore the specific features of each brand and the bikes it produces so that you can gather a short list of the brands you’d like to look into, and the ones that aren’t to your taste. Test some of the bikes from certain brands if you like the sound of them so that you know how they feel to ride.

Do You Want A New Bike Or A Used One?

If you do decide to buy a used motorbike, then you need to consider the seller and whether or not they’re reputable, and the condition of the bike you’re looking at. You can do an online vehicle check to assess the history of the bike, and also examine its log book. If you’re still unsure after these checks and a physical examination of the bike, then ask a professional mechanic to take a look before you commit.

Buying a motorbike is an exciting experience for anyone, and by following these tips you can easily find the vehicle that suits your needs and will bring you joy for years to come.